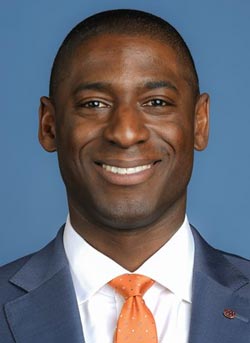 Allen Greene, known as a dynamic and energetic leader, is in his first year at Auburn after being named the program’s 15th director of athletics on January 18, 2018. Greene served in the same capacity at the University at Buffalo from November 2015 until his arrival at Auburn.

One of the youngest athletics directors in the NCAA power five ranks, Greene, 41, is highly regarded by his peers. A former baseball player at the University of Notre Dame, he is actively engaged in the National Association of Collegiate Directors of Athletics, Minority Opportunities Athletics Association, and LEAD1, an association dedicated to preparing today’s students to be tomorrow’s leaders.

Greene’s tenure as director of athletics at the University at Buffalo is noted for success on the field and in the classroom, as well as for donor and corporate development efforts that led to an array of facility enhancements.

In the classroom, UB sports teams achieved a GPA of 3.00 or better for 11 consecutive semesters, with football earning their highest team GPA in the programs Division I history.

Greene was instrumental in building donor and corporate support for UB athletics, including arranging an apparel partnership with Nike. He also spearheaded development of the UB athletics facilities master plan and led several capital projects, including the approval of an $18 million, 92,000 square-foot indoor practice facility that had been on the docket for nearly two decades.

Greene also has experience working in the Southeastern Conference, having led several important business development and fundraising functions at the University of Mississippi. Prior to joining Ole Miss, Greene spent two years working as an athletics fundraiser for Notre Dame and five years in its compliance office.

A graduate of Notre Dame with a degree in finance, Greene was a three-year starter for the Fighting Irish baseball team. Greene was selected by the New York Yankees in the 1998 MLB draft and played three years in its minor league system. Greene later received his master’s degree from Indiana University.

Greene and his wife Christy, have three children, daughters Rian and Seneca, and son Samuel.