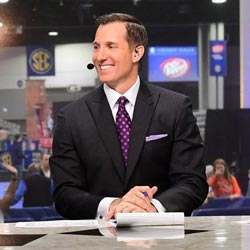 Christopher Paul Doering (born May 19, 1973) is an American former college and professional football player who was a wide receiver in the National Football League (NFL) for seven seasons during the 1990s and 2000s. Doering played college football for the University of Florida, and thereafter, he played professionally for the Indianapolis Colts, the Denver Broncos, the Washington Redskins, and the Pittsburgh Steelers of the NFL.

Doering joined ESPN in 2015 as a studio analyst, though he had contributed to SEC Network+ and certain ESPN specials previously. These days, Doering most notably appears on SEC Network’s signature show, SEC Now, where he works alongside Dari Nowkhah and Gene Chizik. He also contributes to SEC Network’s spring football coverage in March and April and is the co-host of SEC Today on SiriusXM SEC Radio.

“I’m incredibly blessed to get to do what I love every week and call it ‘work,’” Doering said. “I have the opportunity to give back to a game and a conference that have given me so much. I feel so lucky to be a member of our SEC Now team with Dari [Nowkhah] & Chiz [Coach Gene Chizik]. We all have such a blast together and I couldn’t be more thrilled to continue as part of the SEC Network family.”

“Chris Doering has been a breath of fresh air for us since joining the network in 2015,” said SEC Network coordinating producer Pete Watters. “His easygoing style and willingness to work hard to get the job done make him stand out as a fan favorite and a favorite of our production team. Whether it’s his attention to detail on a football Saturday, or traveling to campus for our spring football coverage, Chris treats everyone he comes into contact with like a long-lost friend.”

College football fans might remember Doering from his on-the-field work before stepping into the analyst chair. He left Florida as the SEC’s all-time career leader in touchdown receptions and a first-team All-SEC selection in 1995.