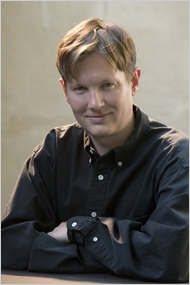 Lars Anderson is a senior writer for Sports Illustrated.   He covers college football among other sports. Anderson penned a regional cover story on Alabama's defense in 2011 and has written features on Cam Newton at Auburn, coach Frank Solich at Ohio and the history of spring practice. The most important piece of his SI career, according to Anderson, was his 2011 cover story on the tornado that struck Tuscaloosa, Ala., and how sports was going to play a role in rebuilding that sports-obsessed city.

Anderson is the author of five books: The First Star: Red Grange and the Barnstorming Tour that Launched the NFL (published by Random House in December 2009), Carlisle vs. Army (Random House, 2007), The All Americans (St. Martins, 2005), The Proving Ground: A Season on the Fringe in NFL Europe (St. Martins, 2001) and Pickup Artists (Verso, 1998).  Both Carlisle Vs. Army and The All Americans have been optioned for movies. Of Carlisle, Booklist, in a starred review, called the work "a great sports story, told with propulsive narrative drive and offering a fascinating look at multiple layers of American pop culture." Anderson wrote a sixth book, The Storm and The Tide, about the 2011 Tuscaloosa tornado and Alabama's national championship that season. It was published by Time Home Entertainment Inc., a division of Time Inc., in August 2014.

A native of Lincoln, Neb., Anderson joined SI in 1994 following a short stint as a general assignment reporter at the Lincoln (Neb.) Journal Star. He received a B.A. from St. Olaf College in Northfield, Minn., and an M.S., from the Graduate School of Journalism at Columbia University